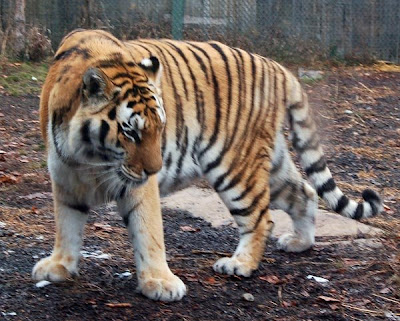 Big cats (and little ones, too) fascinate me! These Siberian (Amur) tigers were on the move; playful and feisty. One would circle around and “attack” the other one. Then, the other would “return the favor”. Reminds me of how kittens play. 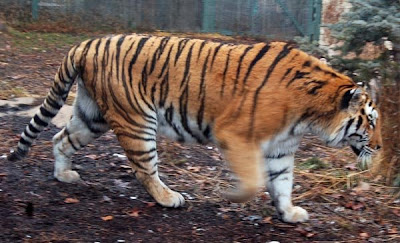 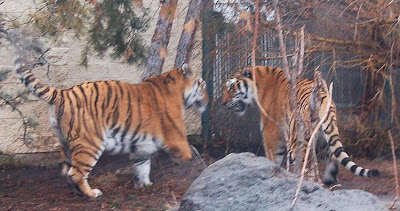 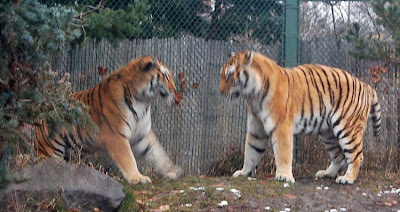 Siberian tigers are considered “critically threatened,” and are bred in captivity as part of the Species Survival Plan. They were almost extinct in the 1940s, but have made a come-back through the SSP. There are some that still live in the wild, but their habitat is shrinking and poaching is a big problem, even though they are listed as endangered.

One of the reasons these two were so active and playful on such a cold rainy day is that they originally come from eastern Asia and Russia where extreme cold and snow are common. So, like the penguins we saw that day, they were lovin’ it outside.
Posted by Ms M at 9:39 PM

Wow these tigers are just beautiful! I sure hope you were using a long zoom. It's amazing to watch big cats and see traits that one also sees in domesticated cats. Somewhere I have a photo of me with a tiger taken in Thailand. I was a bit nervous, but the poor tiger was probably completely drugged and couldn't even move. Here kitty, kitty, kitty!

We loved watching these tigers! I shot these photos from behind a glassed-in viewing area. (I have a Nikon dSLR with a zoom, so that helps).
Wow, so you had your photo taken next to a tiger? Was it at a zoo or a nature park?